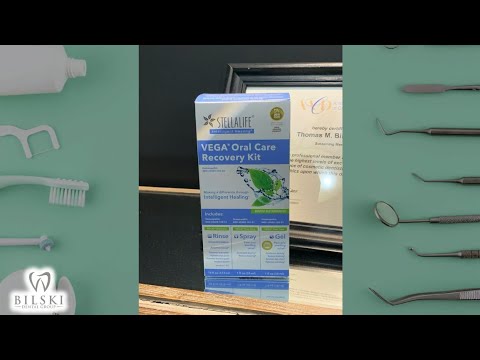 Dr. Bilski goes over why StellaLife is an amazing alternative to Chlorhexidine for pre and post-op surgical procedures, as well as daily hygiene.

Alesha- “Hey everyone, it's Alesha, Today I'm here with Dr. Bilski of Bilski Dental Group. In today's video, we are talking about StellaLife, which is an alternative mouth rinse.”

Alesha- “And you're going to tell me a little bit about it.”

Alesha- “The taste of it. Especially if you're not taking a pill.”

Alesha- “I would prefer it, yeah.”

Dr. Bilski- “OK, there are some medicated mouth rinses that are out and available off the shelf. If you want to go and pick it up at the pharmacy, you can do that. What we're finding, though, is there are some medicated mouth rinses that have traditionally been prescribed and used over the last 20 years and don't necessarily want to name them. But the product is called a Chlorhexidine Gluconate and what we're finding is it actually destroys the gum tissue and the bone tissue following a surgical procedure. So what we're talking about with StellaLife, meaning what do we want to use to help a patient prior to a surgery or prior to a deep cleaning, which is root planing and scaling. So if you have a gum disease and we want to clean that up without surgery, we would have you use this rinse. And now this is called a pre-emptive analgesia. That's a fancy name for saying use this rinse three to seven days prior to coming in and it helps reduce inflammation.”

Dr. Bilski- “And the bacteria counts, and the viral contaminants in the mouth.”

Dr. Bilski- “When we use it with surgery, we want you to rinse with that and say we're going to remove a tooth and place a dental implant, immediately following the removal of the tooth and the implant placement or just maybe a bone grafting procedure after the tooth is removed, we take a little jelly on a q-tip and we just swab it around there.”

Dr. Bilski- “And I didn't want to bring the photos because a little graphic, but you have to trust me on this one. We've been using it for some time now. That's a newer product. It is holistic or organic, I like to call it vegan. Does it really mean the same thing? But it is 16 herbs.”

Alesha- “Ok. A lot of people are looking for that.”

Dr. Bilski- “And they are, myself as a general dentist, I was trained traditionally. Now I'm seeing the benefits of a rinse and it's a recovery kit that you saw there. That means you can start it before we do the procedure and you use it for the next maybe seven to ten days. And I see you at fourteen days. And the results are remarkable. There is a significant difference.”

Dr. Bilski- “And in comparison with the medicated rinses or Listerine, it's hands down. It looks great.”

Alesha- “Wow. I really like the sound of that. I'm sure like I said, a lot of people are looking for that holistic approach right now.”

Alesha- “But it's better than your typical medicine?”

Alesha- “Most of the medicines that you have to take that are liquid, they just don't taste good.”

Dr. Bilski- “So that's kind of the nice thing about it. Alcohol tends to irritate the tissues. So Listerine would not be appropriate following surgery.”

Alesha- “Ok. It sounds like it's all around the better option and you prefer it. And that's what's important.”

Dr. Bilski- “I prefer it, and many of the leading dentists that are doing oral surgery and trying to optimize the oral environment, if you will, before, during, and following the treatments are utilizing them. And you'll see it all over the Web or the Internet. Just type in StellaLife and see who's using it. They're actually coming out with programs where if the dentists in the area aren't delivering that, which we are, they're actually StellaLife Inc is setting up these little pharmacies so that you could find it and locate it. You don't need a prescription for it.”

Alesha- “So they are just still introducing to people who maybe aren't using it.”

Dr. Bilski- “Yeah and there's a lot of studies coming out of dental schools in the US, one in particular from Indiana, very promising. It looks wonderful.”

Alesha- “Ok wonderful. Thank you for sharing that with us. I was not aware of that and I'm sure there's a lot of people out there that don't know about StellaLife. Maybe their dentist isn't utilizing it. Maybe it's something they're interested in. If that's you and you're interested in finding out more about Dr. Bilski's office and you want to make an appointment with him or Dr. Timberman, you can do so by giving them a call and explore all the rest of the services online at bilskidentalgroup.com. Thanks again, Dr. Bilski.”

Dr. Fred Gaeta shares how much of an impact StellaLife has left on his practice.

Dr. Charles Davis shares the benefits of using the stellaLife products in his practice.