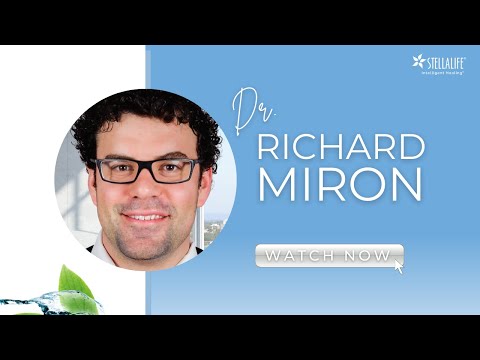 Dr. Miron goes over a study that was done showing how CHX is very harmful for patients to use post-surgically and why the StellaLife VEGA® Oral Care Rinse is an amazing alternative.

"Ok, this week we're going to speak on StellaLife, and this is a new oral homeopathic rinse. And I want to talk about papers that were done many years ago in Bern, Switzerland, on different oral rinses that we utilize commonly in dentistry. And I want to focus specifically on this more natural product and how it can be utilized for oral health care and post-surgery rinses. One thing that we learned from these studies is that the viability of cells that were exposed to different products here H2O2, Chlorhexidine, hydrochloric acid, etc. was very, very damaging for cells. So when we actually look at Chlorhexidine, for instance, within a few seconds, a lot of these cells were actually being destroyed. And by 1 minute, 40% of our cells were remaining alive. So they were actually quite destructive when compared to just standard PBS Rinses. With StellaLife, it was a more natural product. And of course, one of the advantages of going more natural is the fact that it may not destroy as many cells. So we've done some studies comparing StellaLife to Chlorhexidine. And one of the biggest differences here were after 10 seconds and 1-minute rinsing with StellaLife vs. Chlorhexidine, you start to see a lot of cell destruction here shown in red with the Chlorhexidine group. And so when you look at the cell viability with both these groups, if you use 0.1% of the product of each one vs. 1%, everything staying alive. But when you start to get to 10 percent, now all of a sudden the StellaLife is still alive. The Chlorhexidine within a minute, like I said, 40% of the cells are dead. Within 10 minutes, everything's dead. Always remember that Chlorhexidine is quite harmful, actually, to fibroblast. And so when we look at the relative cell numbers and how many cells are alive with the two different products here, StellaLife is able to maintain viability of the cells, whereas Chlorhexidine was really destructive here. When we looked at the relative number over time, by 3 days, like I said, there was no cells that were alive in the Chlorhexidine group, whereas with the StellaLife, the more natural product, it was able to maintain cell viability here. We've done a number of studies now looking at the ability for collagen secretion in the different groups. And of course, PDGF, this is both being improved with the StellaLife product, whereas with Chlorhexidine, it's being significantly reduced. And the big one here is the inflammation that's being caused with chlorhexidine. And I think a lot of clinicians forget that when they use Chlorhexidine, always remember that it's also harmful to fibroblast. And these studies here very clearly show the large increase in inflammatory markers. In some countries, a lot of people don't know this in North America, some countries have actually banned the use of Chlorhexidine in their countries for dental procedures because when they get exposed to bone cells or you rinse extraction sites with Chlorhexidine, it's very, very harmful to cells and it causes apoptosis. So in those cases there, people have been looking for solutions. StellaLife is a material that's from the United States, of course. We were very interested to test for the first time. And we found here that it led to quite good results here. I haven't done any experiments looking at the other end of the spectrum to see how much it kills bacteria, etc. But from an actual bio-compatibility point of view, it's very good with cells from the oral cavity."

"So we found in conclusion here, StellaLife was one of the first antiseptic solutions that are used to maintain cell viability. It's also used to increase over tenfold when compared to Chlorhexidine cell viability, and it's going to improve collagen and TGF, whereas there's no real significant impact on inflammation when compared to Chlorhexidine. So, again, it's probably something that's going to gain a lot more momentum in the coming years. We've done one simple study here. There has been some nice clinical studies that have been done. If you've never heard of StellaLife, have a look at it, read more about it, because it could be one of these types of oral rinses that might change your practice. So thanks everybody for joining this week and I look forward to seeing everybody next week. Thank you."

Dr. Ryan Hambleton talks about how his patients loves to use StellaLife products.