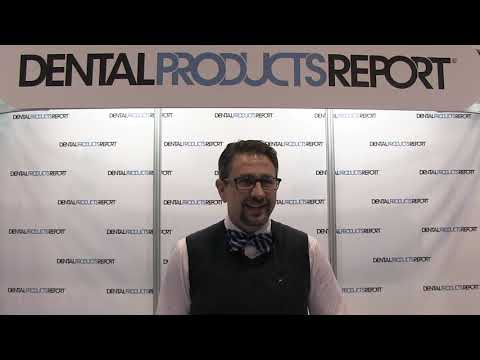 Dr. Josh Brower shares some of the new and innovative products that caught his eyes during the recent 2020 Chicago Dental Society Midwinter Meeting and Lab Day and describes the trends he sees these products representing.

“My name is Josh Brower, I've been in practice over 20 years and I have kind of an implant-based practice and I think there's a lot of things that are new as far as that kind of practice goes. I think right now I'm at Chicago Midwinter and I'm seeing many, many, many scanning cameras, you know, internal cameras, scanning cameras. I know there's a new mobile app where the patients will take home their camera and actually do teledentistry with you at home. It's called in to, that was really fantastic. I think there's a lot of movement in that direction. As a surgeon who does a lot of surgery, I've kind of switched away from Chlorhexidine. We kind of discovered that Chlorhexidine is like the atom bomb. It kills everything, and sometimes you want the fibroblast to stay there and help the tissue. So, there's products, StellaLife that I've been using and I've had a lot of good results where instead of giving them Chlorhexidine or some other kind of product, we use it under their tongue. We put the gel on the wound and then we give them the rinse to take home. I've actually even had patients email me now and say that they had no pain with no painkillers that I've prescribed. So for me, that's new. I haven't ever had that before. So I have also got a dental lab, and so there's a lot of new products here for dental labs. 3D printing is really everywhere now. I'm seeing, I bet you over 30 different types of 3D printers here and it's not even lab day here. So it's kind of interesting there. There's quite a few things out there, but I would say the teledentistry is very new. I think the StellaLife, you know, is the Chlorhexidine replacement, which has been around forever, is very new. I think that the ability of dentists to bring their lab in-house is becoming more and more real. I think people that were big proponents are really adapting. You know, like myself, I've kind of just done an entire lab for other dentists where I can use bigger mills to move faster. But I see in the probably the next five to 10 years, many general dentists buying even these bigger machines to do the bigger cases for themselves, just to be able to have more control over it. So I think overall, there's always new things here. I purposely look to the one that says new exhibitor and walk up and take a look at them, because, you know, I've been coming to this show for 20 years, and I think that's always neat to see what people think. I've seen a lot of patient financing. I've seen a lot of medical billing. I've done a little bit of all those things. And I think medical billing is not going away and that's something that people are really going to refine and bring into their practice more probably in the next five years. I think you'll see maybe 30% of the practices in the United States start to do that. So I think those different people that teach it, and show you how to do it, and process it for you are going to become more well known all the time. So a lot of new products, a lot of good things out there.”

"We have seen a big acceptance from our patients, better healing it's been just incredible." -- Dr. Carrie Pumphrey